by MoCoFootball Staff on 11/21/10
Mike Cornejo for MoCoFootball.com
The 2010 WCAC Championship
Sunday, November 21, 2010 - 2:00 PM
Our Lady of Good Counsel Falcons (9-2) vs. DeMatha Catholic Stags (9-2)
The battle between two of Maryland's finest and most talent-loaded private school football programs will kick it off at 2:00 PM today at Navy-Marine Corps Memorial Stadium in Annapolis, Maryland.
This is the 7th consecutive year that these two teams will meet in the championship game. DeMatha (Prince George's Co / Hyattsville, Md) won the regular season meeting, 31-28 on October 8.
Last year, Good Counsel won the WCAC title, 14-7. It was the Falcons' first title having lost to their arch-rival for five consecutive meetings in the title game. The Stags had won it for six straight years coming into 2009. 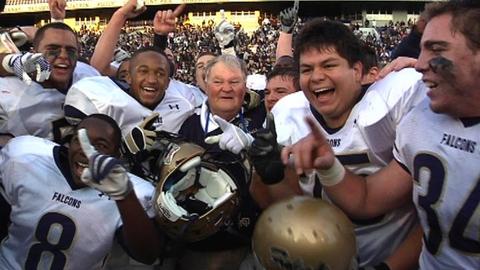 2009: Coach Bob Milloy and the Falcons upends the 6-time defending champions, DeMatha
The winner of the regular season usually lost the title game (and vice versa). It has held true for the past three years. If this trend holds true, then the pressure is on Good Counsel to win it.
The Falcons are coached by Bob Milloy. Milloy is one of the most prominent figures in Montgomery County football history having won titles at Springbrook (6 titles) and Sherwood (2 titles). He has head coached in almost twenty Maryland state championship and WCAC title games. This is his 10th season at Good Counsel having arrived in 2001.
DeMatha's Bill McGregor has been the head coach for the Stags since 1982. He has guided the Hyattsville school to 19 WCAC titles including 8 in the last decade.
Here is how their October 8 meeting went: (via goodcounselfootball.com)

DeMatha got the ball first, but the Falcons defense held, led by a sack by Joe Rosenblatt.  GC was also forced to punt on their first possession.  The first quarter ended 0-0, but DeMatha was threatening in the red zone.

On the first play of the 2nd quarter, the Stags took a 7-0 lead.  Soon after, the Falcons fumbled deep in their own territory, allowing DM to score easily and take a 14-0 early lead.  Kendall Fuller got GC back in the game quickly, with a 95-yard kickoff return for a touchdown to cut the DM lead to 14-6. Good Counsel forced DeMatha to punt on their next possession, and Blake Countess almost took it to the house, but was stopped after a 55-yard return.  GC took advantage of the Countess return, converting on a 28-yard TD pass from Zach Dancel to Stefon Diggs.  DM still led 14-13 and increased the lead to 21-13 with another score before the half.

GC opened the second half with the ball, looking to cut into the DeMatha lead.  The Falcons offense mixed it up well during this series, using a combination of run and pass plays, including several runs by Dancel.  Dancel connected with Diggs for a 15-yard touchdown to complete the drive.  The Falcons went for two on the conversion to tie the score at 21, and were successful as Dancel hit Diggs with a short pass.

With the score tied 21-21, Good Counsel looked to have the momentum after stopping DeMatha on their next possession.  However, the Stags defense held and DeMatha hit pay dirt when a rollout pass play turned into a 71-yard touchdown.  It appeared that there was a penalty flag on the touchdown play, but the referee picked up the flag.  Again GC had to play from behind, 28-21.  Dancel  found Diggs downfield on a pass play for a big gain.  Following a bizarre sequence of penalties, Dancel narrowly avoided a DM defender on a roll-out to the left, but was able to maintain his balance and throw an accurate TD pass to Diggs to tie the game again at 28. Mike Nicastro saved a possible touchdown return on the kickoff.  DeMatha took advantage of their excellent field position, cashing in with a 33-yard field goal to take a 31-28 lead with 1:36 left in the game.   Good Counsel was able to get into DM territory, when Stefon Diggs turned a routine flip pass into a big gain, cutting back and forth down the field.

Who to look for... (as mentioned by our forum members)