by Matthew Miller for MoCoFootball.com

THE COUGAR DOME - In what has become one of the biggest games in Montgomery County every year, Damascus (2-0) rallied in the 4th quarter to outlast the Quince Orchard Cougars (1-1). Before a standing room only crowd which covered the track, the Hornets and Cougars played what many may call the best game of the season thus far.

As both teams entered The Cougar Dome, the place errupted. The fans were ready, the officials were ready, the coaches were ready but were the players? Perhaps not, as both teams started off anxious and traded punts in the early part of the first quarter. The Damascus Hornets opened the scoring with 1:50 left in the first quarter as QB Connor Frazier (205 pass yards, 99 rush yards, 3 pass TDs, 1 rush TD) connected with Sean Winner for a 9 yard touchdown.

On the ensuing kickoff, Quince Orchard running back Mark Greene took the ball up the middle and past all defenders expect for WR/DB/kickoff specialist and University of Virginia recruit Brandon Phelps. As Phelps came up to tackle Greene, he missed and seemed to be holding his leg on the ground. Phelps was on the ground, and the entire Damascus sideline was quiet. He was then helped off the field but did not return for the remainder of the game. Quince Orchard started their drive on the Damascus 30-yard line.

Cougar QB Drew Murphy (2 total touchdowns) continuously hit wide receivers with pin-point accuracy, Quince Orchard was suddenly on the 9-yard line prepared to score. On the next play from scrimmage running back Mark Greene took the handoff from Murphy and fumbled the ball. The Hornets recovered and started their drive. 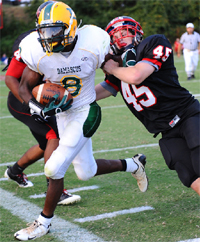 After a 5 yard penalty which put Damascus on the 4-yard line, Connor Frazier took the snap and threw a quick strike to WR Joel Ross. Ross sprinted past defenders on his way to a 96-yard touchdown. In the blink of an eye Damascus led 14-0. As the Hornets crowd was exuberant, the Cougars crowd was equally shocked. Needing points, Drew Murphy marched the Cougars 65 yards down the field and threw a 31-yard touchdown pass to WR/K Harry Long to make the score 14-6. The extra point was missed. Quince Orchard later scored on a 24-yard field goal by Harry Long with 32 seconds left before the half.

At halftime the score was 14-9 in favor of Damascus, but Quince Orchard had taken the momentum away. The Cougars received the football to start the second half. The boys in black and red put an emphasis on the run as their offensive line overpowered and began to dominate the Damascus defensive line opening up holes for running backs Mark Greene and James McCallister. The drive ended on 4th and 1 from the 1-yard line when Drew Murphy took the ball into the endzone to give Quince Orchard their first lead of the game. This time the point after was good and the score was 16-14 with 8:40 left in the 3rd.

Damascus' next possession was their shortest, lasting only one play when the ball was fumbled and Quince Orchard recovered on the 18-yard line. Three plays later, Mark Greene ran the ball into the end zone and the extra point was good to give Quince Orchard a commanding 23-14 lead. Both Cougar touchdowns came in the span of 1 minute and 29 seconds.

The game seemed as if it would turn out like the previous five matchups. Both teams traded punts before Quince Orchard started to drive in Damascus territory late in the 3rd quarter. The Damascus defense held strong as they contained the Cougars rushing attack on 3rd and 2 and 4th and 1 to create a turnover on downs.

When the game moved into the 4th quarter; Damascus looked to be running out of time. Connor Frazier moved his team down the field consistently scrambling for huge gains and Damascus started to gain hope. Damascus was then faced with a 4th and 6 on the Cougars 40-yard line. Damascus Head Coach Eric Wallich called the same play that worked so well earlier in the game, a screen pass to speedster Joel Ross who took the ball 40 yards for the touchdown. Quince Orchard blocked the extra point try and maintained a slim three point lead. The score was now 23-20 with 6 minutes and 11 seconds remaining in the game.

The Cougars next drive started with even more emphasis on the running attack. Quince Orchard looked to gain first downs, run down the clock and score a touchdown. After gaining a first down, the Cougars then decided to throw the ball. Drew Murphy rolled to the right and threw the ball downfield resulting in an interception by Damascus super sophomore Zach Bradshaw. The Hornets took over on their own 47-yard line with 4:44 on the clock. This was perhaps their last chance to win the game or send it into overtime.

After a 3 yard run to midfield by running back Mark O'Hara, the Hornets lined up in shotgun formation. Connor Frazier took the next snap 29 yards down to the 21 yard line. Two plays later, Frazier gave Damscus the lead back as he scampered up the middle for a 21-yard touchdown. Damascus had their first lead since early in the 2nd quarter, 27-23; with 3:40 left on the clock.

The Quince Orchard faithful knew there was plenty of time to win the game. After receiving the ball, the Hornets defense once again held strong and forced a 4th down decision for Quince Orchard Head Coach Dave Mencarini. He decided to punt and Damascus took the ball over on their own 17-yard line with 2:48 left. Damascus then got two straight first downs to run the clock down to 10 seconds. Quince Orchard did not return the ball instead elected to fair catch it at their own 40 yard line. The Cougars now had time for one last miracle.

Instead of trying the hail mary play, Quince Orchard decided to try a hook-and-ladder with multiple backwards laterals. Damascus made the tackle and the clock had run down to 0:00. Damascus players and coaches rushed the field as the game was over. Or was it? After a few minutes of hysterics, Damascus was called for a personal foul face mask call and Quince Orchard was awarded one untimed down (A game cannot end on a defensive penalty). The officials spotted the ball on the 21 yard line. The Red Army was loud and the Swarmin Hornets fans were flabbergasted.

Drew Murphy rolled right, threw the ball into the end zone only for it to fall incomplete, and now the game was officially over. Once again, the Hornets players and coaches rushed the field in joy. They had finally gotten the four year old monkey off of their back.

In the result, Quince Orchard proved that they have reloaded and are still a top team in Montgomery County who on any given Friday can beat anyone. Coach Mencarini and his staff will learn from this game and believe me they will be much tougher if these teams meet again. Damascus showed that they are a true 3A contender, more talented than people think and can win a big game without perhaps their best player Brandon Phelps.

Next week gets no easier for the Cougars as they welcome the Whitman Vikings into the Cougar Dome in which could be the best game of week 3. The Hornets travel to Blake next week but everyone knows their thoughts are on their humongous battle with Seneca Valley in week 4.

The Game was CSNWashington's Game Of The Week. The following are highlights from the big game.