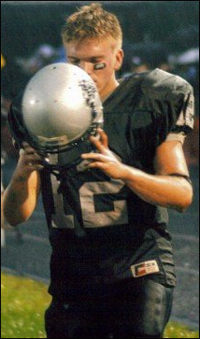 2008: Named Atlantic Central Football Conference Rookie of the Week (Nov. 17)... ACFC All-Academic honoree... Appeared in two games; Washington & Jefferson and Salisbury Played the entire second half against Salisbury, completing 9-of-12 passes for 156 yards and one touchdown... Was a perfect 4-of-4 for 63 yards and a touchdown on his first drive against the Sea Gulls... Completed 3-of-4 passes for 38 yards and scored a one yard rushing touchdown on the second drive.

mocofootball.com: Josh Volpe, arguably one of the best quarterbacks in Mo' County Football History! how are you doing?

JV: I'm doing well, feeling a little sore since I just got done with a two-a-day but that's life as a football player, gotta love it!

JV: The biggest difference that I have seen so far is the depth of each position in college. In my situation right now there are six legitimate Q.B's that all have good talent and could play given the opportunity whereas in high school you might be two-deep and would be lucky to be three-deep. So, I would say the talent across the board at each position is the biggest difference.

mocofootball.com: Six! What is your current playing situation at Frostburg and how has the competition been?

JV: As of right now, I am battling for the starting spot and anxious to get back out on the field. The competition is stiff though especially sharing reps with six other quality Q.B.'s. I have to make sure I make the most out of every throw that I make, but I am optimistic about the upcoming season and hopefully I can bring some of the magic I had at Northwest to Frostburg.

mocofootball.com: Speaking of Northwest. It's been brought to my attention that you have fellow Northwest Jaguars alumni as teammates, what is that like? And how many other Jags are there playing for Frostburg?

JV: It is a lot of fun having some fellow Jags here because those are the people you know you can count on the most not just on the field but with other things off the field as well. Currently there are six of us from the 2007 class that are on the team; Anthony King, Derek Sheely, Morgan Cammack, Kiven Williams, Dewayne Washington and me. Derrick Fields is also here but he is not playing. Bottom line is that we are always sharing laughs and reminiscing about the good 'ol days at Northwest.

mocofootball.com: What do you miss most about Northwest football?

JV: The thing I miss most about Northwest has to be the camaraderie of the team; it was really like we were all family and supported each other no matter what the circumstances. I miss the coaches just as much as they were not only experts on X's and O's but were positive role models as well... the alumni support was also very special as you have guys from the first years at Northwest come back and tell you stories from when they played, the school spirit was also a plus. I can, without a doubt, say that the best years of my life took place at Northwest playing football.

mocofootball.com: With 33 touchdowns and just one interception your senior year. You rivaled one of the most prolific athletes in MoCo history in Deontay Twyman. Your passing rating, as calculated by a forum member, was the highest compared among the state's best quarterbacks at that time and your name popped in conversations as to where you belong among the greatest high school quarterbacks to come from MoCo, and even the whole state of Maryland. Coming in a virtual unknown, what was that like?

JV: It is still sort of surreal for me to think about that, especially since I started out on Seneca Sports [youth football league] as a third string tight end, It's hard for me to explain but I just thank God that he gave me the opportunity that I had at Northwest. The fact that I had some of the most talented skill players in the state didn't hurt either. However, I look back to a point in which that success started which was the Saturday after we lost the Richard Montgomery game my junior year as the group of juniors then vowed to each other that we would work hard every day so that the feeling of defeat wouldn't happen again, we were with each other seven days a week working to get better, so I also have to attribute the success to all the work that everyone put in during the offseason.

mocofootball.com: Coach Trivers consider the 2006 Northwest team as, "the most deserving team to be in the State Finals." The Jags did go 10-0 for the first time in school history. Destroying much of the competition along the way including a payback victory against Richard Montgomery from that week 10 loss you suffered your junior year. A rematch against Q.O. turned into a rout as well with NW putting in 56 against the Cougars. Now as a fellow Jag, I'd hate to mention this. And I hated watching the video. But in the playoff game against Sherwood, what was so different and why did it unfold the way it did?

JV: That is a question that still haunts my mind and is still hard for me to think about. I have yet to even watch the full game other than a few plays here and there. But that whole day just seemed really weird to me, the weather was off and on, then I threw my first pick, then Joe Lefeged got hurt; it's like whatever could go wrong went wrong, but at the same time I still look at myself and know I could have made a few more plays to win the game. That game is one of a few memories that will always stick in my mind and wonder, "what if?"

mocofootball.com: You're playing for Tom Rogish at Frostburg. 2008 was his first year as Head Coach for Frostburg. Being there in '08, you know what it's like for a program to go through a head coaching change. Northwest as you know is having another head coaching change for the second time in two years. How do you think will Northwest do? And how will a third year quarterback in Jahrett Butler- who has gone through three offensive coordinators- do in the process?

JV: I'm very excited about Northwest and their upcoming season. I helped out during passing league and worked out with them all summer and I believe they have a good chance to be a contender for the title. Coach Maradei has done a great job so far especially during the toughest summer that the Northwest family has gone through. These guys are ready to get after it. I have also been impressed with the leadership of Jahrett. He has stepped up as the leader of the team and has gotten them through some tough times. I have seen his skill set improve too so I'm excited to see what kind of numbers he can put up for the Jags this season and wish him the best since he has had to change offenses in his senior season. I am going to make it back to as many games as I can as I am still a Jag at heart.

mocofootball.com: If the world doesn't know it yet. I'm going to say it. Josh Volpe is a Dallas Cowboys fan. Living amongst us In the Washington D.C. area! Josh, if you could speak for the Dallas Cowboys fans of the area, tell us, how does a person become a fan of a rival team almost 1400 miles from home? How does that happen?

JV: [laughs] You can blame that one on my dad. He was a diehard Cowboys fan all his life so that quality just rubbed off on me I guess and I wouldn't want it any other way. I take a lot of flak when they lose to the 'skins but when they do beat them there is no better feeling in the world. I got a lot of Cowboy fans surrounding me too so that makes it a little easier [laughs]. But I love the cowboys and I always will and hopefully they can take home their sixth Lombardi trophy in the near future.

mocofootball.com: Josh, thank you for your time. It's been a pleasure and an honor. Anything you want to say to the MoCoFootball.com community?

mocofootball.com: and of course, that of Northwest Football!

JV: I would just like to thank all of the high school sports fans in MoCo, there is nothing like having a full stadium on Friday night and for that I thank all of the fans as I believe they are the best in all of Maryland. And to Northwest; embrace the challenge that is in front of you, don't take anything for granted, and become the champions that I know you can be!!