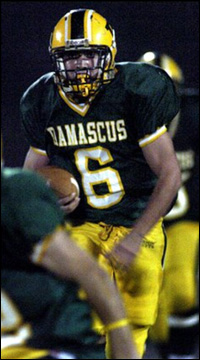 "I thought I would be too small to be a high school running back."

"A hard worker who spent last season working at the rover position... Showed some progress in the strength and conditioning program, but needs to continue working to add strength... Could play a role on the scout team this fall."

2005: Worked at the rover postition while redshirting... Registered a pair of tackles in the first spring scrimmage.

A MOCOFOOTBALL.COM EXCLUSIVE WITH MATT REIDY

Named to George Michael's Golden 11 as a senior... A two-time all-state, all-metro, all-county selection... Named All-County Player of the Year as a junior... Led team to a 4A state championship in 2003 and a region championship in 2004... Rushed for 1,866 yards and 17 touchdowns as a senior... Also had 80 tackles, five interceptions and two blocked punts during senior season... Finished career with over 3,593 yards rushing.

mocofootball.com: Explain to us your situation in terms of playing college football.. like, where are you now and what are you doing

MR: Well, I'm currently at Virginia Tech, I came here as a recruited walk-on. I am on the scout team right now playing strong safety, we had 2 jv games, I played in those. Hopefully this spring I'll be able to get on the dress squad and maybe get some action on special teams.

mocofootball.com: What would you say is the biggest difference so far between college and high school football?

MR: Definitely the speed of the game, it feels totally different at this level. Also the amount of time you put into it, with meetings, films, lifting and practices.

mocofootball.com: Your career as a player for damascus, what do you miss most?

MR: That's a tough question, I miss a lot about Damascus football. I would have to say all my teammates. We all played little league together and just became so close. I miss how much fun it was playing in high school. Now it feels more like a job.

mocofootball.com: Do you still keep in contact with your former teammates?

MR: Yea I do. Everytime were all home we try and get together. We're all still real good friends.

mocofootball.com: I remember, it was 2003, correct me if I'm wrong, when you were called upon to start at runningback vs. Northwest in week 5- as much as I hate to mention it- which was basically your breakout game... have you ever thought back later in your high school career, or even now as a college football player, that if it hadn't been for such an opportunity, how different would you be now?

MR: It's funny I remembered that like it was yesterday. Delaney went down in the Richard Montgomery game and we played Blair the next game and the coaches gave me a few carries at running back and I guess they liked what they saw. I played running back all throughout my career up until 9th grade. I thought I would be too small to be a high school running back. So I knew I had the running back instincts in me just didn't know it would turn it like it did. Haha yea sorry, that was an awesome game. Me and Ike still argue about that game to this day.

mocofootball.com: Northwest just played Damascus in a close battle with the Jaguars coming out on top. Do you and Ike ever get into it about your former schools? Betting on the scores or who wins the game?

MR: oo yea it definitely still comes up. I think I hear from him everyday that Northwest is undefeated. Ha ha, I just tell him to wait 'til the playoffs, Damascus is a play-off team; I'm sure Coach Moo's got a few tricks up his sleeve ha ha. No bets though, just a little trash talking hear and there

mocofootball.com: Any memories wearing the green and goldâ¦ what has to be, your most memorable moment as a player for Damascus?

MR: I would have to say, when we beat ER (Eleanor Roosevelt HS). That was such an amazing feeling. No one expected it. That win was definitely my most memorable moment.

mocofootball.com: I remember that! and the media boasted on ER's D-1 stacked team.

MR: yea they had quite a few [Division 1] players who are starting now.

mocofootball.com: Damascus has Quince Orchard for the first round of the playoffs this friday.

MR: After what I heared about the first meeting, I think I have to go with Damascus. Quince Orchard being at home is a big advantage for [Quince Orchard] because those fans are pretty amazing. But I still think Damascus will pull it off in a close one.

mocofootball.com: We've just about concluded the first chat interview for mocofootball.com. This is a first and we hope to expand and improve it. Thanks Matt for helping expand our Montgomery County football online community. Anything else you want to say to mocofootball.com fans?

MR: Just how great Montgomery County football is and a large part of that is due to the fans. I like what you're doing with this website, its nice being able to see what the fans have to say.

MR: Thanks a lot for this opportunity