BREAKING DOWN THE RANKINGS : #MOCOFB

BREAKING DOWN THE RANKINGS

It's out first week of our ever tougher rankings that has been condensed from a Top 10 to the best eight. So far the rankings have been fairly the same but the biggest exclamation point goes to Damascus for having earned the top spot after surviving a tough month of football. 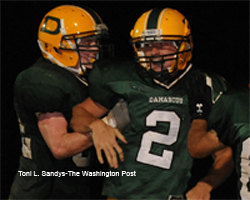 The Hornets' takeover of the #1 spot in our rankings came after an exciting game against another highly ranked opponent, long-time rival Seneca Valley. The Hornets dethrone Sherwood, a team that has held the top spot since preseason due to a weak September schedule.

Sherwood goes down to the #2 spot even with an unquestionable dominant performance against all they've faced this year.

This Friday, Damascus travels to Springbrook while Sherwood plays Gaithersburg. These teams are the remaining undefeated teams in all of MCPS football. Both games, are our MoCoFootball Game of The Week.

Sitting at #3 is Quince Orchard since week 2 of the rankings. By now, we'd like to think Coach Mencarini and his squad has brushed off the only blemish on their record especially after a beat down of Northwest in week 4. They play the other NW, Northwood, this Friday and after that has a string of tough opponents which include #8 Clarksburg, 2-2 Einstein, and #4 Seneca Valley.

Seneca Valley is our #4 team and was only points away from #5 because of their loss to Damascus. But like Quince Orchard, since the game had been close, they didn't go down much in the rankings and therefore solidified such a high ranking despite not being undefeated. Seneca Valley is a tough-team-tested squad. The Eagles' first four opponents do not have a losing record.

#5 is Gaithersburg, a team enjoying their first undefeated September in just the third time in the last eleven years. They have a great leader in Zack Fetters and their passing game include some giants at wide receiver. They can move up even higher in the rankings when they play recently demoted #2 Sherwood this Friday.

#6 is a 3-1 Whitman squad who put up a dominant performance over their Bethesda rivals, formerly ranked Bethesda-Chevy Chase in week 4 with a 44-7 thrashing of the Barons. The Vikings' only defeat is to Quince Orchard, a team that could easily be MoCo's #1. That was a tight game too with the Cougars winning by just five points. Whitman could be at least the #3 team in all of MoCo had they won that. Their dominant performance versus B-CC, coupled by Gaithersburg's survival game against Walter Johnson should have, in my eyes, vaulted the Vikings to the #5 spot.

Untested and undefeated is Springbrook. The #7 Blue Devils play one of the county's softest schedules. Only Rockville, Wheaton, and Einstein has a collection of struggling opponents. Springbrook escaped with an 8-3 versus Blair in week 4. On the positive, Springbrook do have one of the best players in all of MoCo with running back Devon Pestano. Defensively, the Blue Devils are working hard. Not one opponent has scored more than once in a game against them- making them the toughest defense in all of MoCo having allowed just 22 points. They can move up in rankings if they can beat #1 Damascus this Friday.

Teams receiving votes in the rankings include B-CC (3-1), a team, like Watkins Mill, recently lost a game. And the other is the Crusoe Gongbay show, the Rockville Rams, that has won three straight since week 2.

So how does your top 8 look? send us your top 8 and tell us why. Forum members are doing that now, too.

Read more into the rankings including our trusted rankers' comments at mocofootball.com/rankings.html. For scores, alumni updates, and random rants, follow me on twitter at twitter.com/MikeCornejo.