DAMASCUS - Hornets quarterback Conner Frazier knew his team would win Friday, but by no means a sure thing. Not until the game's final minute. 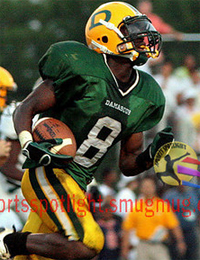 With 60 seconds left on the game clock, Seneca Valley quarterback Max Nicholson  rolled to his left and fired a 20-yard pass to the end zone that would have given the Eagles the lead - maybe the game, but instead it was Damascus cornerback Joel Ross who came down with the ball securing the 22-16 victory for Damascus at home.

Frazier helped the Hornets erase a 10-point second half deficit with two touchdown runs including a 10-yard run scamper with 4:01 remaining to provide the final margin. Frazier finished the night with 14 carries for 70 yards and two scores.

"Coach (Eric) Wallich said before the (final) drive to get ready to run the ball," said Frazier. "We tried to run early in the game they kind of shut it down a little. We kept shooting ourselves in the foot and we knew that if we kept the penalty yards down we could win in the second half and that's what we did."

The senior signal caller wasn't exaggerating about mistakes either. The game started with Damascus quickly earning over 50 yards of penalties before their first drive ended. Their second drive didnât fare any better when Frazier's 65 yard TD strike to Tyler Patton was called back because Frazier was over the line of scrimmage when he let go of the ball, causing the Hornets to punt.

Seneca Valley had its own problems, racking up three turnovers on the night. But the Eagles were able to go into half time clinging to a 3-0 lead. The Eagles came out in the second half fired up, stuffing Damascus' opening drive and then going to their workhorse running back Eddie Cunningham on the ground. Cunningham's 41-yard run to the 9-yard line put Seneca Valley in scoring position and two plays later he did the rest with a 5-yard touchdown run. Cunningham finishes with 25 carries for 160 yards and a touchdown.

"When they needed it, they were able to take care of business while we hurt self," said Seneca Valley head coach Fred Kim. "I can't fault the kids. They worked hard. You can't win when you turn the ball over."

The question all week was whether or not Damascus star wide receiver Brandon Phelps would play. Phelps, who has committed to the University of Virginia, was recovering from a hip injury suffered against Quince Orchard in Week 2, but hadn't played since then. Phelps led the Hornets' on to the field but saw little time on it after that. Wallich said afterward that he was maybe at 60% and thus only playing in special offensive packages' and on defense. However, he made his presence felt with a 21 seconds left in the third quarter when he picked off backup quarterback Tanner Vallely's pass and returned it 40 yards down  to the 6-yardline to set up Frazier's first touchdown run.  Kim had tapped Vallely to give his team a spark; he just didn't assume it would be for the other team.

In Phelps offensive absence, Ross filled in nicely with three catches for 62 yards.

The win gives Damascus a significant advantage in the Maryland 3A West. In a division stacked with the some of the state's best talent the only guarantee to make the playoffs is an undefeated record.

"In my opinion this is the states toughest region. We'll enjoy the win tonight but we know only about the games we play."

Damascus is now 4-0 going into Week 5 against Springbrook (4-0) while Seneca Valley will regroup with a game against (0-4) Kennedy.

Damascus vs Seneca Valley was the CSNWashington.com Game of the Week