BOWIE, Md. - When the final whistle blew, one of Vince Lombardi's quotes echoed through my head; "We didn't lose the game, we just ran out of time."
The Washington offense looked to be in prime position late in the game to cap a successful drive before they failed to convert a 4th-and-1 on the Baltimore 12 yard line. Washington RB Crusoe Gongbay took a direct snap and rushed toward the middle of the field. The chain crew was brought in to measure and ruled the run short of the first down. That ultimately became Washington's last chance of scoring.

On Washington's next defensive series, what looked like a successful run-stuffing defense was marred by a facemask penalty against DT Darian Cooper. Even with two timeouts left, the Washington defense would struggle in the final minutes of the game to stop Baltimore's efforts to run out the clock. Baltimore would go on to win, 21-17 in front of over 2200 fans.
The back-and-forth scoring affair was kicked off with Virginia Tech-bound Michael Branthover kicking a field goal halfway through the first quarter for the game's first points on the board.
Baltimore responded with Quentin Ezell's 6-yard touchdown run in the second quarter followed by Josh Rivera's extra point. Baltimore looked to extend the lead but was halted with Washington's Sherrod Baltimore grabbing an interception in the redzone. QB Connor Frazier then commanded a drive late in the first half where he eventually found Milton Williams in the end zone from 18-yards out. Williams jump balled with the Baltimore defensive back to score Team Washington's first touchdown of the game with five seconds left in the first half. Branthover's extra point gave Washington a 10-7 halftime lead. 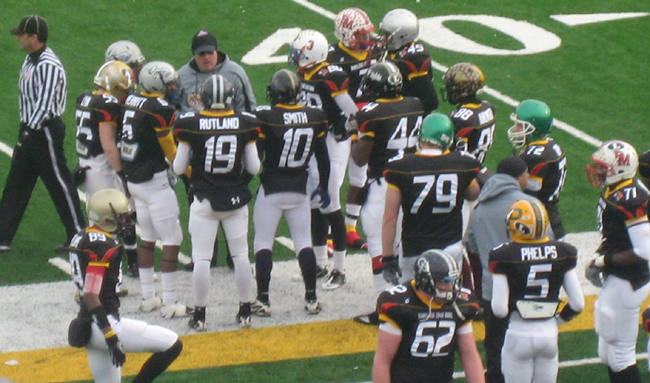 The second half began with either team trading some comical punt defenses. For safety reasons, The Crab Bowl does not allow kick/punt defenses to cross the line of scrimmage to attempt to block. Nine minutes later, quarterback Mike Fafaul found Colin Osborne for a 43-yard score to to cap an 81-yard 9 play drive to give Baltimore their second lead of the game.
After a nice kick return for Washington, Connor Frazier was able to connect with his Damascus teammate Brandon Phelps on a 51-yard fade route. It took all 18 seconds for Washington to take the lead back from Baltimore in the third quarter.
Baltimore had the ball to begin the 4th quarter and called a dagger of a trick play. RB Brandon Bayer ran right and threw a beauty of a pass to Colin Osborne on the right sideline. Washington DB Joel Ross detected the halfback pass a little too late and failed to catch Osborne who scored his second touchdown of the game. Osborne totaled 93 yards receiving in those two touchdown grabs alone.
Osborne's touchdown would eventually put Baltimore on the lead for good and give Team Baltimore their first win in the Maryland Crab Bowl's three games.
Notes: 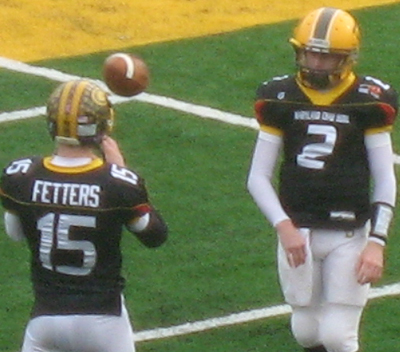 Zack Fetters started for Washington at quarterback and proved to be quite effective with his feet more than his arm. He lead all Washington rushers with nine rushes for 43 yards. Through the air, he was 3-for-16 for 28 yards and one interception. His passes were a mixture of overthrown, under thrown, and dropped passes. Fetters also doubled as a long snapper.
Washington's best player on offense is Connor Frazier who went 11-for-17 for 166 yards and 2 touchdowns. He rushed for 13 yards; good enough for second among Washington's rushers.
All but one receiver caught a pass for Team Washington. Brandon Phelps only caught two passes, but his 60 yards total (and the 51-yard long) leads all receivers. Milton Williams had the most catches for Washington receivers with his three catches. Crusoe Gongbay caught four passes for 49 yards.
Crusoe Gongbay's longest run of the night was on kick return- one which he returned for 40 plus yards. Donte Williams had a long kick return himself and to his credit are some bone-jarring hits on special teams.
Defensively, Sherrod Baltimore's three interceptions stood out. DT Darian Cooper (9 tackles, 1.5 sack), DT Giovani Francois (4.5 tackles, 2 TFLs, .5 sack), LB Andrew Bose (3.5 tackles), S Jamal Merritt (4 tackles), and LB Ascene Jacques (4 tackles) were the most active on defense. Jacques left early in the 4th quarter with what looked to be an injury to his left leg. He limped his way onto the sideline with help from trainers.

At halftime, a few Maryland Crab Bowl alumni were introduced to the fans at midfield. Andrew Veith (Clarksburg), Ronnie Heckman (Rockville), and Ivan Tagoe (Paint Branch) among a few others were on hand to see the game.
"Huh?" moments
Before that 4th-and-1 that Gongbay and Washington failed to convert, they were not far off from where Team Baltimore was just at. Prior to that drive, Team Baltimore went for it on 4th and short as well. With under 5:30 left in the game, Baltimore was on their own 21-yard line which they failed to convert.
Team Washington punter Michael Branthover punted a ball that looked to be headed to the endzone for a touchback, but the punt returner signaled to fair catch the ball and caught it inside their own 3-yard line.
Opinions
The game was cold but tolerable. Last year's Crab Bowl game had stronger winds and lower temperatures.
Through a player's perspective, it may sound a lot cooler and bragging-rights-worthy to say one played in a Division I bowl or NFL Stadium, but Bowie State University's smaller stadium compared to one like Johnny Unitas Stadium is perfect for the game. It did not have the fancy video boards, elevators, and spacious press box lounges. The locker rooms for the players and coaches was a trek. The building to buy tickets was a four-minute walk as was the parking space. But the smaller stadium made for a much louder and better game experience for the fans.
There were some obvious empty spaces on the bleachers but it wasn't as overtly obvious compared to a bigger stadium. It was a really good crowd but not uncomfortable.
Not a fan of parking fees (even if it was just $5.00) but the parking/ticket booth attendants handled their jobs with professionalism.
All three Crab Bowl games are each uniquely special. Despite the hectic operations of running an entire state's all-star game, Maryland Crab Bowl CEO Sean O'Connor somehow finds a way to be communicative and have the game running smoothly. Kudos to him for a job well done and good luck for his next project; the Chesapeake Bowl which is in eleven days.