DAMASCUS Md. -  A battle between two Montgomery County heavyweights in their respective divisions clashed tonight in what became another classic thriller. The #1-ranked Damascus Hornets proved to be MoCo's best after upending what was the only other undefeated team in the county, #2 Sherwood Warriors.

Sherwood (6-1) began with a beautiful return across midfield onto Damascus (7-0) territory to the 40-yard line. Damascus' Joel Ross would halt the Warriors' drive before turning the ball over himself on the offensive side of the ball which Sherwood recovered on the Hornets' 25-yard line.

Warriors' wide receiver Alex Cole would eventually find a way to combat his way through the sturdy Hornets' defense with a pitch to paydirt and it is 7-0 Sherwood with 6:54 left in the first. 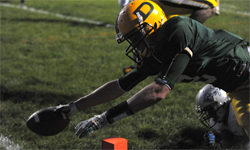 Not to be outdone, the Hornets answer with classic Damascus ground game and short passes with star quarterback Connor Frazier throwing for an 11-yard TD pass to Zach Bradshaw tying the game at 7-7 with two minutes left in the first quarter.

The second quarter began with the Connor Frazier show which included a long run and a drive aided by a personal foul against Sherwood advancing Damascus 15-yards further. The Hornets continued a successful drive which included a 4th and 3 on the Sherwood 17-yard line. Damascus would eventually get the lead after Frazier connects with Alberto Marroquin from the 2-yard line and making it 14-7 Hornets.

Sherwood's offense answers Damascus' drive with a spectacular one of their own. Warriors' quarterback shows the fans that they too have a quarterback with some legs as quarterback A.J. Pignone take the quarterback draws including a 50-plus yard gainer setting the blue and silver on 1st-and-goal at the Damascus seven-yard line. Pignone runs the draw up the middle and gets to the endzone, 14-all with 6:04 left in the half.

After an unsuccessful Hornet drive, the Warriors decided to get fancy running the ball under the wildcat formation before throwing an interception on a halfback pass at 3rd and 2 to Damascus' Joel Ross.

The score would remain at a 14-14 stalemate for the first half.

In the 3rd quarter, after Damascus fumbled the ball on their opening drive, Sherwood's A.J. Pignone continued to dazzle fans with his feet running for some 55 yards all the way to the Damascus 7-yard line. Damascus' defense would hold strong and keep Sherwood out of the endzone and eventually getting them to settle for a successful field goal. With 9:19 left on th 3rd, Sherwood is back with the lead, 17-14. 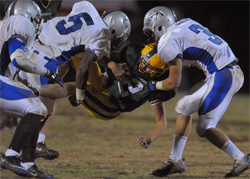 Damascus and Connor Frazier regroups and orchestrates a successful drive with Alberto Marroquin scoring for the second time in the evening to make it 21-17 with 6:08 left on the 3rd.

The Warriors set up shop on their own 25-yardline driving the ball down to the Damascus 11. 1st and 10 at the Damascus 11 and the Warriors fail to get to the endzone by only getting 1-yard thereafter. Warriors kick the field goal to cut the Hornets lead 21-20, 51.5 seconds left in the third.

With 10:30 left on the game, Mike Gouterman goes down with a serious injury (neck) stopping the game for a mere twelve minutes before an ambulance had to take him away.

The Hornets continue to drive down Sherwood and cap it off with a Malcolm Pugh touchdown. The extra point went wide, and with 6:05 remaining in the contest, the Hornets extend their lead 27-20.

Sherwood's Jamal Merritt would return the kickoff to their 29-yard line to begin the drive. A.J. Pignone was active again with his feet and even completes a pass that looked to have been over thrown only to be caught by another Warrior for another first down. Sherwood would eventually call their final timeout with 2:11 left in the game looking to convert a 4th and 3 on Damascus' 27-yard line. Pignone's pass would fall incomplete and the Hornets take over on their own 27.

Damascus would try to run the ball as much as they can to milk the clock down to 25-seconds before calling a timeout and punting the ball.

Sherwood's Mike Begley returns the ball to the Sherwood 44-yard line leaving the Warriors with 10.6 seconds left to play for Sherwood's hope of a game-tying drive. 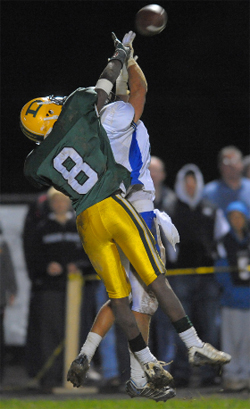 A.J. Pignone and Sherwood would throw a series of long bombs toward the endzone that was defended well by Joel Ross and the rest of the Hornets secondary. Time was not on the Warriors' side and they kept testing the air deep in the waning seconds until time expired.

Damascus has once again proved their mettle, recovering enough miscues to defeat a relentless Sherwood team with a final score of 27-20. Damascus remains undefeated at 7-0 and now is the lone undefeated team in MCPS football. The win may have once again proved the toughness of the Montgomery County 3A Division as it had been for the longest time.

Damascus's win versus Sherwood isn't jsut for a 7-0 record, it is also for a 7-game win streak over the Warriors. The last time Sherwood beat Damascus was in 2002.

Remaining in the Schedule:

Paul Lucas, Jenny Smith, and our friends on the forum contributed to this report.