GOTW: SV at DMAS and BCC at Whitman : #MOCOFB

GOTW: SV at DMAS and BCC at Whitman

When Al Thomas took over the Damascus program in 1988, he left behind a legacy at one school and began one at another. The Maryland high school coaching legend was the first coach at Seneca Valley in 1974. But after leading the Screamin' Eagles to their fifth state championship in 1987, he left the Germantown school for Rt. 27 neighbor Damascus. What followed was one of the most heated rivalries in the entire Washington, DC region.

That rivalry will be rekindled this Friday when #4 Seneca Valley (3-0) heads to #2 Damascus (3-0). Both teams have been nearly unstoppable this season. The only hiccups in either schedule were dramatic victories against serious contenders. Seneca's closest game came in a Week 1 overtime thriller at home against Clarksburg, while Damascus withstood a hostile road crowd and squeak by #3 Quince Orchard in Week 2.

Now, the two MoCo powerhouses will determine which one will suffer its first loss of 2010. Clearly, neither wants to go home 3-1.

Conner Frazier (32-45-1 518 pass yards 7 TDs, 4 rushing TDs) has been the leading man for the Swarmin' Hornets this season. After top-receiver Brandon Phelps went down with an injury against QO, Phelps put his team on his back to lead them to a come-from-behind 27-23 victory. It is unclear whether Phelps will be able to play against Seneca Valley, but what is clear is that the senior quarterback will have a major influence on the game's outcome.

"They have a very good team with lots of good players," said Kim. "When you play a guy like Conner (Frazier) he elevates everyone else's game. We have to contain him. We have to stop those (big plays) or at least minimize them. Being able to do it both on the ground and in the air will be trouble for us."

If Seneca can control Frazier, it will help. However they have their own star in running back Eddie Cunningham (62 rushes for 539 yards, 8 TDs). The senior scored the winning touchdown against Clarksburg and has been the Screamin' Eagles workhorse thus far.

My pick: A close, hard fought game goes to Seneca Valley on the road, 20-16. I could eat my words on this, but sometimes you get a feeling.

The other big game of Week 4 is #8 B-CC (3-0) and #6 Whitman (2-1). Whitman started its season with solid wins against Northwest and Walter Johnson before falling last week in a tight battle with Q.O. Led by senior quarterback Henry Kuhn (34-73-1 409 pass yards 3 TDs), the Vikings have the ability to play with anyone and have proved it thus far in 2010. Now they welcome in a Barons team on homecoming looking to get back on track. However, the added distractions that come with homecoming could complicate that. 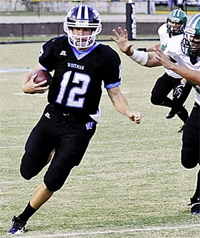 B-CC is off to a surprising start at 3-0 and enters the game against cross-town rival Whitman in the best position they have been in years. The Barons have shown the ability to win on the ground or win in the air and they may need both to take down Whitman. Quarterback Kasey Cotting (33-58-2 509 pass yards 5 TDs, 4 rushing TDs) can either put the ball up to his exceptional pair of receivers DeAndre Cooper and Terrence James, or simply hand it off to running back Matt Bookman. All can get the job done. And if all else fails, don't be surprised in Cotting calls his own number and runs it himself.

"We prepare every week like it's life or death. And we try to instill that same attitude in our players," said Whitman head coach James Kuhn. "B-CC is doing a great job. They are well coached and have some outstanding athletes. It's obvious on film which helps to sell it to our players."

My pick: Whitman gets a nice homecoming win in a shootout, 34-31. The Vikings are just a little too strong for the Barons.