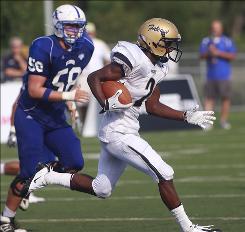 There are a total of 352 players invited to play for the South team. This includes twenty players from Washington D.C.,  224 from Maryland, 104 from Virginia, and four from West Virginia.
The inaugural game had The South team win 30-27 despite being down by two touchdowns in the game. Gilman's Darius Jennings led the team with his 150 yards of offense. QB Zach Dancel (Good Counsel / Univ of New Mexico) connected with RB Malcolm Crockett (Friendship Collegiat, Einstein / Pittsburgh) on a 34-yard pass to pull within seven seconds in the half before winning it all by three.
The 2011 game will be played on December 30 and it is slated to kickoff at 7:30 pm. The exact location is yet to be determined but it will be played in the Baltimore/Washington/Annapolis area. For more info, check out www.chesapeakebowl.com
Michael Cornejo contributed to this report.