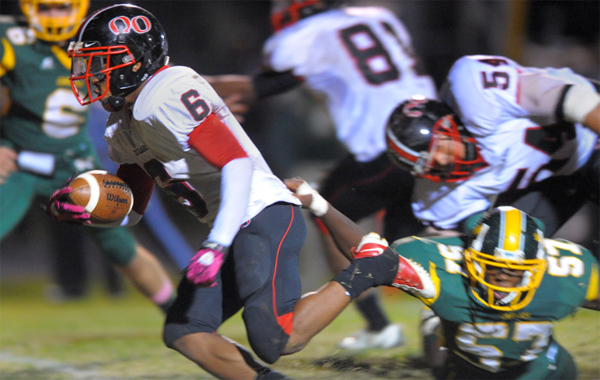 GERMANTOWN, Md. - With his number one running back out with a leg injury, Quince Orchard head coach Dave Mencarini approached backup Mark Green at half time and had one message: "We're gonna ride or die with you."

And that's just what the Cougars did.

Quince Orchard withstood a dramatic Seneca Valley comeback to hold on for a key 3A victory, 24-13 in Germantown on Friday on the shoulders of the junior Green. Filling in for the injured James McCallister, Green rushed for 122 yards on 34 carries and two touchdowns to lead his team to victory.

"Mark did a great job for us tonight," said Mencarini. "We wore him out."

The Cougars started early and finished fast Friday. After each teams' first drives stalled, Seneca lined up for a routine punt from its own 20 yard line, but the result was anything but routine.

Senior Cougar linebacker Alex Twine showed why he is one of the best all-around players in the county, by getting through the Eagles line and blocking Junior Arcaro's punt. The ball fell in front of about four Cougars at the goal line who picked it up for the game's first score.

With an early lead in hand, Quince Orchard kept the ball on the ground. The Cougars offensive line dominated up front for Green who ate up chunks of yards at a time and getting them in a variety of ways - Up the middle, off tackle, around the corner - you name it, he ran it.

Before Seneca could get any rhythm going, the Cougars had added a Harry Long field goal and the first of Green two touchdowns and headed into the locker room with a comfortable 17-0 lead.

"I always want to make big plays and help out my team," Green said after the game. "I saw a couple of holes and took 'em and ended coming away with a score."

But that's when things got interesting. On the second play of the second half, Screamin' Eagles running back Eddie Cunningham broke through the Cougars defensive line, then cut right through four defenders attempting to gang tackle him in the secondary before racing to a 53-yard touchdown run. The run ignited the home crowd and changed the momentum of the game entirely.

Two possessions later, Seneca safety James Jones-Williams ripped the ball from Quince Orchard's Corday Thomas after a completed pass, causing a fumble that was quickly scooped up by Screamin' Eagle defensive back Tre Cunningham who took it down to the 17 yard line.

The play set up a halfback pass from Bernard Wolley to Tanner Vallely on 2nd and 7 for a 14 yard touchdown reception, pulling Seneca Valley within 4 points with 6:16 in the third quarter.

The score remained 17-13 until midway through the fourth quarter when Green striked again from 11 yards out to provide the game's final margin, 24-13.

Seneca Valley had a chance to add another late score but quarterback max Nicholson's pass on 3rd and goal was intercepted by Long to seal the game.

"They're well coached. They're disciplined. They play ball, you know?" said Seneca Valley head coach Fred Kim. "You've got to take advantage of your opportunities and we had a few, but then we didn't take cash in on the other ones."