Primo, el rante: Dear Los NFL, you guys have los your minds. Just because Miami has a huge population of Spanish-speaking people, just because the Jets' star quarterback is Mark Sanchez, and that attention dirt digger Ines I-dunno-why-eberyone-look-me?! Sainz is making headlines, just because Gloria Estefan, Marc Anthony, and J-Lo are part owners of los Dolphins does not mean you alienate the rest of the country by shoving Spanish down our throats. This is America, and this is American football. It doesn't make us the citizen of the world by changing our surroundings to appease those who don't speak the official language of the land. Our nation's military didn't sacrifice their time and their lives for this to be a divided nation. So what if it's Hispanic Heritage Month? If that's the case then where's Black History week for the NFL? Where's White week? Native American week? Pacific Islander week?... The last time I looked, Miami is still part of the United States. How are we going to stay united when language, the very essence of communication, is divided? No me gusta NFL, No me gusta.

Four weeks of football in September and we're still a few days away from October. We got teams that feel like this month isn't long enough- Damascus, Gaithersburg, Sherwood, and Springbrook - the only four teams left in all of MoCo with unbeaten records (well, include Landon in there to make it five). Then there are those that have Green Day's "Wake Me Up When September Ends" playing endlessly on their iPods. It's raining outside too; let those emotions flow in dramatic fashion.

I pictured Seneca Valley's Coach Fred Kim on a Sunday morning staring at a calendar on his kitchen table. He has yet to touch his wheaties cereal with the fresh cut bananas and blueberries, doused in muscle milk (all while curling 45 pounders on each arm). He's going, "eeny, meeny, miny, moe" because he's not sure which date to circle; November 12? or November 19 for a possible rematch with the Swarmin' Hornets for the 3A West Regional title? When you have Quince Orchard, Whitman, and a revamped Watkins Mill team for the last three games of the regular season (they're a combined 9-3), including some Frederick County heavyweights... I wouldn't know either.

THE BIG GREEN AND GOLD GAME

It was another classic rivalry game at Damascus. Seneca Valley was clinging onto a 3-0 halftime lead before Connor Frazier and company got the SV coaches screamin' their lungs out at all the turnovers that Damascus took advantage. It was one of those, "whichever team has the ball last will win this" type of game, and that's basically what happened with Damascus defensive back Joel Ross coming up with the interception in the end zone preventing what could have been the game winning score for the Eagles.

Two-time MoCoFootball Player of the Week 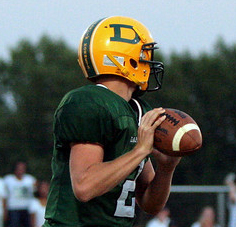 Connor Frazier has to get a BAMF Player award (Brilliant And Most Frustrating) after his performance on Friday night. He can brilliantly pick defenses apart through the air and frustrate with his ability to run past defenders. Knowing who's going to get the ball and being unable to stop it has been the story for those who tried to stop #2 of The Big D. The Howard Cosells' of MoCo Football are eager to say the three words but this Frazier won't go down. He wouldn't go down against Quince Orchard and neither did he go down against Seneca Valley. He's looking like Mr. Heisman Eric Crouch in Nebraska during the late 90's early 00's. Kudos to that Damascus offensive line, still one of Maryland history's best.

Speaking of Heisman, Tim Tebow fan club president Zack Fetters has Gaithersburg undefeated in September. This is only the third time in the last eleven years that the Trojans carried a perfect 4-0 record before entering October. The last time Gaithersburg was 4-0 was in 2007. And the only other time before that was in 2000; Kreg Kephart's first season as head coach. Gaithersburg went 13-0 that year, winning the State Championship crown against "the bulldozer" (CryptKeeper in the forum) Paul Lucas and the Sherwood Warriors.

STILL LAYING THE WOOD / HOW BOUT THAT RANKING?

Sherwood has been our MoCo Football #1 since pre-season. And I have a feeling that's going to change. Damascus and Quince Orchard has been neck and neck on the rankings (usually a one-vote difference as to who will get the higher ranking) and both have played tougher opposition compared to Sherwood. So does a team like Damascus get vaulted to the top because of that? or does Sherwood keep the spot because they are doing an excellent job with what is laid before them? The Warriors' first four opponents have a combined record of 4-12 (.250). Two of those teams are at .500 and the other two are winless. They've so far taken care of their own business averaging 37.25 points per game. Defensively, they are the second-most stingiest defense in all of MoCo allowing just seven points per contest.

Was there any surprise that Sherwood is still going strong with the absence of Pat Cilento in late July? It is as if nothing changed. They are still punishing teams. It goes to show us how strong of a program they have over in Sandy Spring. Their star players could have moved north to River Hill or a little south to Good Counsel, but they didn't. Marc Thomas has never been a head coach before this gig but he certainly looks like it. It doesn't hurt that MoCo Football is in his DNA and that his mentor (who can never get away from the sidelines) is one of the founding inventors of MoCo Football.

We can't be talking about questionable high rankings without talking about Springbrook. If Blair hadn't come back to beat Wheaton 43-42 in week three, we're looking at a Springbrook team that could have had a September schedule of opponents with a combined record of 0-16. Springbrook beat Blair in a baseball-esque score of 8-3. The Blue Devils so far has been running on an old-school Damascus offense with their boring-but-effective run game. Devon Pestano has racked about 600-some yards (3rd highest in MoCo) for MoCo's lowest scoring undefeated team. They're the only undefeated team that hasn't cracked the 100-point mark with 97 points (24.25 average). Only two other teams with winning records (B-CC and Watkins Mill) have yet to do so. Even 1-3 Wheaton has scored more points than those three.

Teams with just a single blemish on their records like Whitman, Quince Orchard, and Seneca Valley aren't just one win away from perfection, nor were they just one or two plays away from a win, but either one of them could be MoCo's #1 team. But they were tested early against tough opponents and it has since dampened their place.

On homecoming night, Whitman put up a dominant defensive performance against rival B-CC. The Vikings forced four turnovers alone while limiting the Barons offense to a total of minus 10 yards in the first half. Defensive coordinator Andy Lee and his army of black and Columbia blue especially MoCoFootball Week 4 Co-MVP Jeff Gruen, Val Djidotor (that's a vicious name), and Tony Atkinson received much credit from Coach Jim Kuhn for the 44-7 drubbing of their Bethesda neighbors.

Another team brought back to Earth is Watkins Mill. After shutting down two teams and winning an overtime thriller, they ran into a determined Clarksburg team who gave them a dose of their own medicine, blanking them in front of their own crowd, 20-0. Had Watkins Mill continued their shutout streak, they would have easily been MoCo's #1 defense. Right now, they sit as the 5th toughest defense allowing just 41 points total in all of September; a phenomenal feat nonetheless. Coach Joe Rydzewski has that program seeing their best start since 1999 when the 'Rines started the season 3-0 before losing to Gaithersburg in week 4. Watkins Mill went on to go 9-1 that season before losing to Severna Park 15-14 in the first round of the playoffs.

Quietly climbing back to respect by getting back to .500 are Paint Branch, and the aforementioned Clarksburg team, Churchill (started 0-2, has won 2 straight since). Paint Branch should be sitting at a 3-1 right now if it hadn't been for what happened against B-CC in week 2. Other than Blake and RM, the rest of their schedule is a tough one which includes games against Gaithersburg, Clarksburg, Magruder, and Springbrook.

Rockville, after losing their first game, had not lost since week one. Senior running back Crusoe Gongbay is the DC metropolitan area's leading rusher with over 800 yards rushing on the ground. He is on pace to rush for about 2000+ yards in the regular season.

After starting the season 1-0, they have lost three straight but Walter Johnson is arguably MoCo's most dangerous. Yes they are not a traditional power, but underestimating them got teams figuring out they're going to have to play at a high level to beat them. Rockville learned the worst way, and the Spartans- er the Wildcats- haven't been lucky since. Still, they've worried some teams along the way. I can see them having their best season in years and they are very capable of winning the rest of their games.

Congratulations to teams finally cracking the win-column: Wheaton (38-0 over Kennedy), Northwood (22-20 over Blake), and especially our Week 4 Team Of The Week, Poolesville.

It was homecoming night for the Einstein Titans who are holding a 14-0 lead over the lowly Falcons to start the 4th quarter. About four minutes later, Poolesville scores and cuts the Einstein lead to 7. With about a minute left in the game, the resilient Poolesville squad was able to score another and to the surprise of the crowd, the game headed into overtime. Einstein got the ball first and scored a touchdown and the extra point was good, then Poolesville answered back with a touchdown of their own, went for it for two, and won the game. Coach Orsini and the Poolesville Falcons, we salute you.

Thus, it was a fun month of MoCo Football. Now, the games get more crucial than ever, the weather gets cooler, and the best of the best gets clearer.

For all and everything MoCoFootball including alerts on alumni, scores, random rants and updates, follow me on Twitter at twitter.com/MikeCornejo.