Week 2 Elite-8 Rankings
by Michael Cornejo
When I requested the coaches and athletic directors for rosters last week, Paint Branch Coach Mike Nesmith happily submitted the Panther's roster and the following message...
"Website looks amazing! I am filing an official protest appeal on Elite-8 rankings since we beat Seneca Valley in the game-like scrimmage." 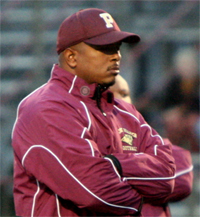 He couldn't be more correct now. After a swift blow to the former conquerors of the 2A in the Rockville Rams, Coach Nesmith and his Panthers dealt the orange-and-black the ugliest regular season defeat in recent memory. Bene't Willis had 95 yards rushing and a touchdown, caught two balls for 71 yards. Defensively, he had an interception and a forced a fumble plus recovery. Madden Cards galore. I don't know what on Earth, "Bene't" actually means but it's probably a verb for, "I'd kick your eeyore so hard you're going to need a new haircut." it's French by the way; he definitely made some Playeur of the Ouik numbers.
Maybe all the summer hype is true? But was Rockville really missing Gongbay that bad? It also helped that Seneca Valley was playing patty-cake with Einstein and Damascus narrowly escaped 4A rookies Clarksburg that helped Paint Branch' case of a higher ranking. Nevertheless, it looks like Paint Branch is the ish... a solid #2 (did you guys get that?). Their 2-rank jump is the highest jump of any team in week one. I don't see them moving up unless QO plays Blair the way SV played Einstein and Paint Branch gets going on Game Genie mode (I'm showing my age).
QB David Smith completed less than 50% of his throws but since he's got Willis, Ortiz Jones, and Javonn Curry making magic out there it gets ugly for DBs. Magruder stands in the way of Paint Branch and with the Colonels winning about four or five or six games a year in recent times then Paint Branch is mistaken if they sleep on these boys. Magruder will fight you (literally I think they fought Northwest in 09) like a bunch of crazed honey badgers. And with QO looming in the following week, Paint Branch is going to need to come out of this game with all of their limbs.
We have the Panthers at #2, Seneca Valley moves down to #3, Damascus' thriller win didn't sit too well with the rankers and so Hornets moved down another notch for the 3rd time in a row since the final rankings in 2010. They now sit an #4. Gaithersburg sits pretty at #5 and Whitman for some doggone weird reason has not moved out of the #6 position since last year. Can the Vikes win by a 100 or lose by

a 100 now because all the 6's are freakin' me out. Watch Val Djidotor actually double the touchdowns he had last week (he had three last week) and Whitman- the actual Walt Whitman- will appear in the middle of the 50-yard line and snatch #5 by the collar before power bombing that Viking mascot that look like it should be chasing president mascots at a Nationals game. Whitman will write Val a poem that goes along like, "Djidotor DjIdidn't know DJu had a good motor..."
Despite losing in week 1, the Clarksburg Coyotes actually move up a notch due to the scare they placed on a highly touted Damascus squad. Stefan Houston proved dangerous having scored all of Clarksburg's points. It is unfortunate that he was stopped short of the endzone in extra time.
Beat Seneca dag nabit.
#1 QUINCE ORCHARD (2-0), 4W

80 points. 10 1st place votes
--> Got the job done against a downed Sherwood squad. Should be able to rest the starters in the 4th quarter againstBlair this week as they prepare for their HUGE week-3 matchup against Paint Branch. -Matt Miller, "millerlite8389"
--> Billy Plante made the throws when needed including a 40+ yard bomb to Devin Haywood.  If QO can run, AND throw, watch out! -Sebastian Salazar (CSN Washington)
--> The Cougars look as good as expected. Anyone on that schedule better be ready to play -Matt Dewhurst (CSN Washington)
--> Solid D and special teams helped QO outmuscle Sherwood. Green looked poised to be the workhorse Mencariniwas hoping he would be in 2011 with a workman-like 130 yards and a score. -Matt Papuchis (Patch)
--> Hard to tell if QO was that good or Sherwood was that bad. -Fred, "BigFred"
--> Did what was necessary in opener.  This team will get better and better as season progresses.  Blair's athleticism makes them sneaky but coaching and discipline keeps them from winning. -Eric, "Cover2"
#2 PAINT BRANCH (2-0), 4E

61 points.
--> QB David Smith threw for 224 yards and 3 TD's while the Panthers looked like the best team in the County against Rockville. -Matt Miller, "millerlite8389"
--> A strong showing against Rockville is a nice way to start the season, but Week 3 matchup with QO looms large for Panthers. -Sebastian Salazar (CSN Washington)
--> I knew Paint Branch was going to come out and play physical. They look as advertised thus far. -Matt Dewhurst (CSN Washington)
--> Magruder provides a nice warm up before the week 3 showdown with the Cougars. -Fred "BigFred"
--> Will have to continue to dominate teams like RHS to get any respect given the weakest schedule in the County.  They may not really be tested until the play-offs. -Eric, "Cover2"
#3 SENECA VALLEY (2-0), 3A

57 points.
--> RB James Jones-Williams had over 100 yards and 2 TD's in win versus Einstein. The Battle for the Kings Trophy looms in week 2, can SV keep their dominance over Northwest? -Matt Miller, "millerlite8389"
--> Nice win vs Einstein and with manageable early schedule, could stay unbeaten for a while. -Sebastian Salazar (CSN Washington)
--> If head coach Fred Kim thinks the Eagles played sloppy in Week 1, I pity the fool who have to play them next. Look for Seneca to bring it Friday against arch-rival Northwest for the Kings trophy from liver shots before it was lights out. -Matt Dewhurst (CSN Washington)
--> James Jones-Williams had two touchdowns and could be a difference maker for the Eagles in 2011. -Matt Papuchis (Patch)
--> The least hyped King's Trophy game in maybe, ever. -Fred, "BigFred"
--> Not real impressive in opener but Battle of Germantown won't be much more than a scrimmage.  Won't know until Week 4 against Churchill how good this team really is. -Eric, "Cover2"
#4 DAMASCUS (2-0), 3A

53 points.
--> Narrowly escaped Clarksburg with a win. Things should be a bit easier in week 2 as they welcome Watkins Mill into the Hornets' Nest. -Matt Miller, "millerlite8389"
--> Drops two spots because of missed opportunities to close out Clarksburg early; nothing that can't be worked out over course of season. -Sebastian Salazar (CSN Washington)
--> From what I saw in the first half, Damascus looked great. But a second half surge from Clarksburg showed some dents in the Hornets armor. -Matt Dewhurst (CSN Washington)
--> Survived a first-week scare but this type of win early in the season should build character. -Matt Papuchis (Patch)
--> Why does everyone in MoCo hate green and gold? -Fred, "BigFred"
--> Squeaked by a tough opponent but a win is a win and no reason to downgrade the Hornets yet. -Eric, "Cover2"
#5 GAITHERSBURG (2-0), 4W

42 points.
--> The Trojans will need another good performance from sophomore RB Solomon Vault in order to beat a toughSpringbrook team this upcoming week. -Matt Miller, "millerlite8389"
--> 35 points on the road against Richard Montgomery tells me that the Trojan offense hasn't taken as many steps back as I thought they might without Zach Fetters. -Sebastian Salazar (CSN Washington)
--> The Trojans seem to be picking up where they left off in 2010. Any eve with the loss of Zach Fetters the WR corps will keep defenses scrambling in 2011. -Matt Dewhurst (CSN Washington)
--> A convincing week 1 win for Kephart's team as the Trojans try to prove they are capable of replicating their 2010 season even without Fetters. -Matt Papuchis (Patch Sports)
--> Will have to be road warriors this year until the new stadium is done. -Fred, "BigFred"
--> Somehow they stayed awake long enough to throttle RM.  Springbrook will provide a better test but result will be similar. -Eric, "Cover2"
#6 WALT WHITMAN (1-1), 4S

32 points.
--> Offense ran for over 330 yards and scored 35 points. However, defense gave up 30 points. The D is still the question mark and will need to get better if they have big time aspirations this season. -Matt Miller, "millerlite8389"
--> I'm very intrigued by Michael Flack at quarterback.  The move means the Vikings' best player will have the ball in his hands on every play. -Sebastian Salazar (CSN Washington)
--> Vikes' QB Michael Flack looks to be a big time threat in the air and on the ground. Keep an eye on him as the season progresses. I know I will. -Matt Dewhurst (CSN Washington)
--> Struggled a bit against Wootton but don't see anyone else in this spot. -Fred, "BigFred"
--> Hard to take Wootton seriously and the Vikings must not have. 90210 Bowl this Week when the BMW's meet the Lexus from Churchill will tell a bunch about both teams. -Eric, "Cover2"
#7 CLARKSBURG (1-1), 4W

14 points.
--> The Coyotes have one of the best home field advantages in the county, and used it to the fullest in a second-half rally against Damascus. Stefan Houston is the real deal and could win Clarksburg a few games on his own. -Sebastian Salazar (CSN Washington)
--> The Coyotes showed poise in their second half comeback against Damascus. And even with a loss, they get my vote to move up the poll. -Matt Dewhurst (CSN Washington)
--> Another overtime loss going for a win.  Gotta give Hurd credit for aggressively going for 2 in overtime or stupidity for not kicking and a second overtime chance.  Should notch a win this week in North Bethesda. -Eric, "Cover2"
#8 CHURCHILL (2-0), 4S