Anyone who started Cole Ahnell in their fantasy team right now is having a helluva week. Seven touchdowns. Who does that? It is as if Ahnell used Game Genie as a butt pad, inserted Madden cards in his wrist coach, all while sipping Gatorade from his helmet. If there was ever a MOCOFOOTBALL.COM dictionary, Ahnell's face should be right next to "video game numbers". Congratulations to Ahnell on a superb performance and congratulations to Walter Johnson for the win and a winning record to end week 9.

MOCOFOOTBALL GAME OF THE WEEK - I

An upset in the eye of the ranking team (I had SV ahead of Whitman so ha!). Seneca Valley took a 14-0 lead in under five minutes with Tanner Vallely hitting paydirt from the one followed by a 25 yard pick six by cornerback Carl Smith.

Val Djidotor got Whitman in scoring position with a long run and Miles Davis hits home to cut the Eagles lead 14-6 in the middle of the 2nd. A pair of Cunningham touchdowns would follow- a 10-yard pass from Vallely to Tre Cunningham and a 14-yard run by Eddie Cunningham to put the Eagles up 28-6 midway through the 3rd quarter.

The Vikes gets in from the one (V. Djidotor) to cut the Seneca Valley lead to 28-14. SV would respond with two more scores to continue the rout. Seneca Valley goes on to win 41-14, securing a playoff berth and proving once again that the cream of the crop resides in the 3A. Turnover prone Whitman (6-3) needs to win next week to secure a spot in the 4A west. They play Churchill- a team coming off an upset victory over B-CC tonight.

MOCOFOOTBALL GAME OF THE WEEK - II

AJ Pignone was the star of the day for the Warriors after rushing for 82 yards and throwing for 146 yards. The shutout win makes Sherwood the MoCo 4A East division champions. Springbrook running back Devin Pestano was out and did not play. Sherwood improves to 8-1. Springbrook has lost two in a row now and is sitting at 6-3. 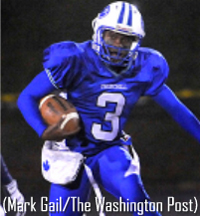 B-CC pulled a Walter Johnson this week. The ranking team finally ranks 'em and they blow it by losing to a team with a lesser record. The game looked to be headed to a 0-0 halftime score before Churchill intercepted the ball inside the Barons' 10 yard line with less than two minutes left in the half. Churchill would eventually score with Curtis Kamara to take a 7-0 halftime lead.

Early in the third quarter, the snap went up and over the punter's head for the Barons' 2 points. Before the quarter ended, Churchill QB (#3) Lansana Keita plunges in from 1 yard out to give the Bulldogs a 14-2 after three quarters.

B-CC would score with under 3:30 left to play in the game to cut Churchill's lead, 14-8. Things got interesting when Churchill fumbled the ball back to B-CC but the Barons could not move forward and Churchill holds on to win 14-8.

The 'Dogs avenge their defeat to The Barons last year. In 2009, Churchill, under the direction of new head coach Joe Allen, was having its best start in years but lost some key games to end the season including to B-CC; where Allen was head coach for two years before coming to Churchill. This year, it was Churchill that started off slow and B-CC that headed to Potomac with the better record. This time, it was the Bulldogs making it difficult for the Barons to secure a playoff berth. 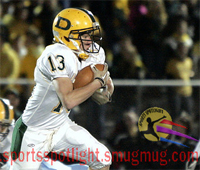 This was looking like a competitive game with the first quarter ending in a 0-0 stalemate. But two minutes into the second quarter, Hornets'(#13)John Hanley would get in the endzone from four yards out and again nine minutes later to make it 14-0 at the half.

A nice Hornets drive to start the third got Mark O'Hara in the endzone three minutes into the 3rd, followed by Connor Frazier's connecting with Brandon Phelps six and a half minutes later for the 26-0 lead. With just under a minute left in the third, Hanley scores once again to complete his hatrick. Austin Garbett would tack on the final touchdown from 11 yards out to get the clock running. The Hornets are perfect at 9-0 and are going to their State-record 13th straight playoff appearance. Meanwhile, the Coyotes are eliminated from playoff contention with a 4-5 record. This will be Clarksburg's first non-winning season since its first varsity season in 2006.

The Trojans won big in homecoming versus the lowly Jaguars. Zack Fetters (210 passing yards) accounted for four touchdowns- two on the ground and two through the air. The Trojans rushing attack totaled just under 220 yards on the ground with Khare Cross leading the pack with his 64 yards in 18 carries. Four different Trojans ran for scores: Fetters (2x), Solomon Vault, Khare Cross, and James Waddy. Fetters connected with Simba Gwashavamhu and Sylvester Oni through the air. Denzel Offor and Stephon Thomas scored for the Jags.

The win secures a playoff spot for the Trojans as well as the 4A West division crown. Gaithersburg finished the regular season at 6-3 B-CC next week. The Jags on the other hand are having their worst regular season record in school history. The once-powerhouse program is averaging just 7.1 points per contest while allowing 35 points a game. The Jags face 4-4 Magruder in week 10 (pending a game Saturday against Paint Branch).

Crusoe Gongbay rushed for 251 yards and three touchdowns. He will need to rush for 203 yards versus Blake in week 10 to get to 2000 yards. The Rams are 7-2 and will need a win next week for a playoff berth.

Wildcats QB Cole Ahnell accounted for all of Walter Johnson's touchdowns passing for six and running for one. Ahnell threw for 211 yards while Sean Montgomery lead all running backs with 98 yards on the ground.

How impressive is Ahnell's 42 points?

The following is the total points scored by each team in 8 games coming into week 9:

This game ended in a thriller like it did last season, but this time the Knights came out on top when star running back Rayshawn Taylor punched in the final score from three yards out, five seconds left in the game.

Wolverines' Mike Offut rushed for 89 yards and three touchdowns to lead Watkins Mill to victory. The 'Rines are now 5-4; their best record since 5-5 in 2006 (they were officially 3-7 that year barring two forfeits).

Blair improves to 3-6. A win next week at Northwood will make a 1-game improvement from their 3-7 finish a year ago. Richard Montgomery is still seeking its first win since October of 2008.

Bears remain undefeated in the IAC.

photo by John Hanley by SportsSpotlight.com